For my last blogpost, I drew a picture of someone sitting in a chair near a window.  A swirl of steam rises from a cup of something hot, bedroom slippers warm her feet.  The trees are bare, spring has not come.  So peaceful.  So calm.  Maybe too peaceful and calm. Let’s shake it up with a story-starting kit: 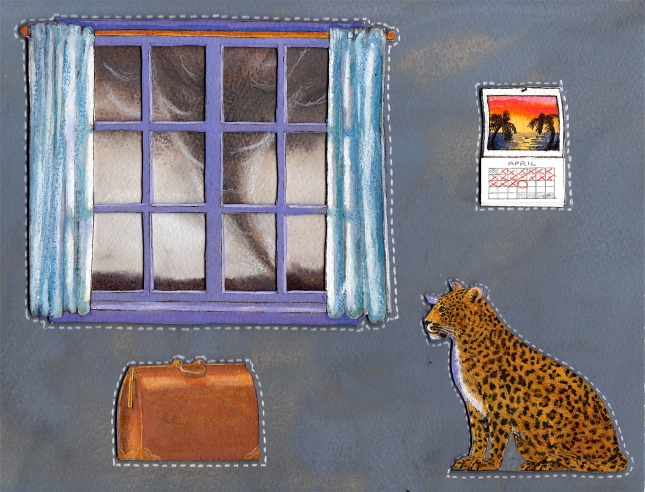 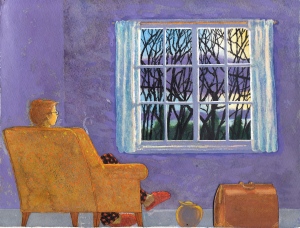 It was an old-fashioned valise; worn, but still sturdy.  Not large, but capable (can a valise be capable?) of carrying a weekend’s worth of clothing if you were careful, which Mary was, which she always had been.  Up until now, she began to feel, she had been much too careful . . . 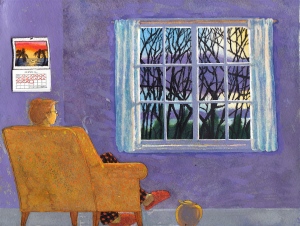 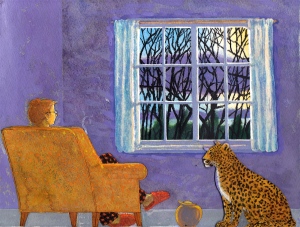 Mary thought she had heard a slight shift of the floorboards, but old houses make noises.  She felt, presently, a presence.  She had the sensation, difficult to locate but a real sensation, of being observed. 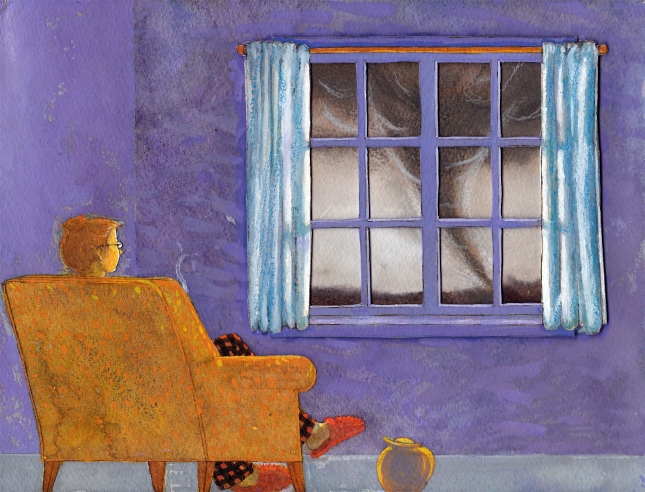 Suddenly, a funnel shape descended from the turbulent clouds, reached right down to the hills.  For an instant, Mary studied it in disbelief.  She was still in her pajamas, but tornadoes really didn’t care about that, did they?  In the solitary second that passed before she jumped up, she did not move a muscle, but every cell of her woke up, shuffled priorities, prepared to go.  She knew what to do, but it wasn’t herself she was worried about.

So, you get the idea.  If not with these items, then with others: a letter.  A ringing cellphone.  A baseball through the window.  The foot and leg of another person visible briefly as they leave the room.  Put any two things together and make up a story to connect them.  Or rather, a person + a place + a thing.  Advanced version: more items.

We are all story writers in real life.  We see a person or an animal or an object that is unexpected, not in its usual place, something catches our eye.  We make up a story, just a little one, to explain it.

I want to say here that the idea for this post started while I was looking at the original, un-storied drawing and it reminded me of an etching by the artist (and personal hero of heroes) David Hockney.  It’s from a suite of 39 etchings he made in 1970 to illustrate Six Fairy Tales from the Brothers Grimm.  This one is called “A Black Cat Leaping,” and it’s from the story, “The Boy Who Left Home to Learn Fear.”  (I would show it to you, but I just went to the DavidHockney.com website to make a link, and found a fairly stern warning about not reproducing the images anywhere, in any form whatsoever.  If you google his name and the name of the etching, you can take a look.)  It’s the stillness of the figure in the chair that made me think of it, and how the addition of just one element, a leaping black cat with fiery eyes, say, makes it a story.

So, have some fun.  Put one and one together.  Make something up.

Tagged: how to write a story, story starters