When I drew the pictures for this book, I had a lot of fun drawing the different feelings that the cat and the girl who broke her arm (Andy’s mother) were having.

Do animals show their feelings the same way people do?  Are their faces like ours?

How do we know when our pet is calm and relaxed, happy? 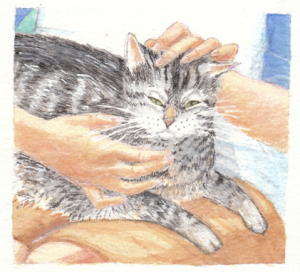 Here is an example of a grumpy cat.  But you would be grumpy, too, if another cat bit you on the head.

From reviews of The Broken Cat:

“Creative and highly engaging . . . an unpretentious paean to the ability of stories to comfort and connect.”

“Tender story of a broken cat, a broken arm, and the healing power of love.”

Other ideas to explore:

Tell your own “Band-aid story”

Second graders at Weber Elementary School (some years ago, now) in Iowa City wrote their own tales of woe (and how they survived to tell the tale) in bandaid- shaped folders made from 8-1/2 x 11” pieces of paper with simple band-aid markings copied onto them, then folded in half.  They called them “Band-aid Stories.”