Here is a link to Lynne Rae reading from and introducing the book Criss Cross, produced by TeachingBooks.net. There may also be a part where she tells you something about her first name.

This link takes you to a wonderfully awesome video of the amazing Lynda Barry (one of LRP’s heroes and favorite human beings.  Though known by me only through her work. Fave being One Hundred Demons.) talking for about 6 minutes about poetry, why it’s great to memorize it, and how you can sing Emily Dickinson poems to the tune of Girl from Ipanema.  You really must see this.

This link is to a little (4 minutes + 44 seconds) video of Maira Kalman (another LRP hero and favorite human being) talking about art and life.  Some of her work is definitely for kids, this little video is philosophical, and I’m guessing it will appeal to you more if you are at least 15 years old.

Here is a coloring page with Johnny Appleseed and apples and kids, to go along with the book Seed by Seed, written by Esme Raji Codell and illustrated by moi: 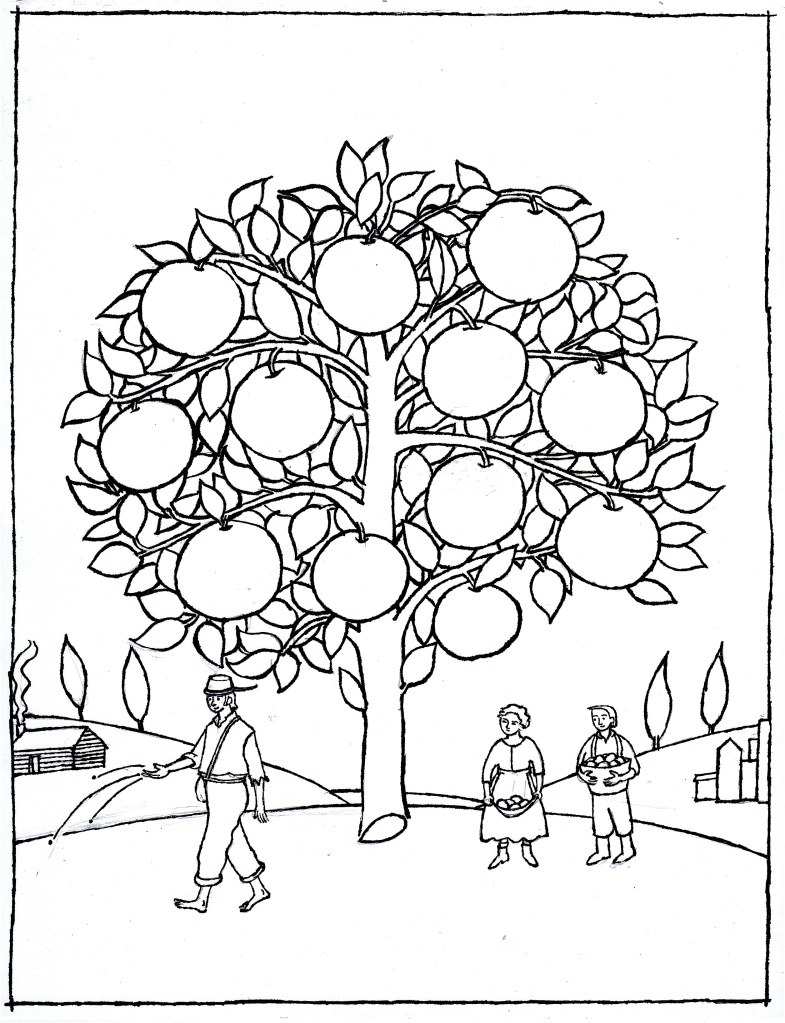 Activities:(please excuse #discrepancies. every time I tried to fix them, things disappeared.)

Discussion Questions and Activities for All Alone in the Universe

prepared by Barbara Auerbach, Librarian, P.S. 217 in Brooklyn, New York, for a study guide from Harper Collins
Discussion Questions:
1. “I know that in geometry the triangle is supposed to be an extremely stable shape . . . but in real life triangles are almost never equilateral. There are always two corners that are closer together, while the third is off a little ways by itself” (p. 38.) Why is Debbie talking about math? How does this quote relate to her, Maureen, and Glenna?
2. Three close friends are sometimes referred to as “the three musketeers,” yet some people say, “Two’s company; three’s a crowd.” Which expression can you relate to? Give an example from your life.
3. Over the summer, Debbie occupies herself doing crafts while she waits for Maureen’s call. Have you ever made a gift for someone or received a gift that someone made for you? what was it? Did it mean more or less to you than a store-bought gift? Explain.
4. Debbie’s mother surprised her when she uncharacteristically stops to pick up a hitchhiker. Why do you think her mom did that? Why do you think Perkins included this incident in the book?
5. Debbie’s neighbor, Fran, tells her, “You know . . . your life isn’t going to start when this thing happens or when that person calls. Your life is happening right now. Don’t wait for someone else to make it happen. You have to make it happen.” What is Debbie waiting for? What can she do instead of waiting? What would you have done in her situation? Have you ever waited for something to happen? What was the outcome?
6. Debbie never discusses her problems with her mother, but eventually she seeks comfort from George and Mrs. Brown, both virtual strangers. Why do you think she does that? She likens Mrs. Brown to her fairy godmother.” How is she like a fairy godmother? Explain an instance when you were comforted by a stranger. Have you ever offered comfort to someone you didn’t know well? Describe what happened.
7. On page 71, Debbie watches a dance performance on television with her dad. describe the dance. How does the action mirror her own life? what lesson does it offer?
8. At school, Miss Epler notices Debbie is upset and tries to help. She ways, “You know . . .maybe this person didn’t take your friend away from you . . . it was your friend who left. All by herself. I just think that if you’re going to be angry you should be angry at the right person.” Do you agree? Why do you think Debbie chooses to be angry with Glenna? Why is it harder to blame Maureen?
9. Debbie’s mother and Miss Epler are both teachers who recognize a student in need. How does Debbie’s mom help Bobby? How does Miss Epler help Debbie? Did you ever have a teacher who helped you or a classmate with a problem? Describe him or her.
10. What incident leads to Debbie’s friendship with Patty? Have you ever been in a situation where something scared you, but it turned out to be nothing? Explain.
11. Debbie glimpses Glenna walking down the street with Maureen and her new boyfriend. She explains, “I wanted to feel satisfaction and revenge. but it was too much like looking into a mirror.” What do you think she means by this?
12. At the Christmas Eve party, Aunt Mary says, “People don’t look out for each other the way they used to.” Do you agree? Explain. Can you find examples from the book that prove Aunt Mary wrong? Who looked out for Debbie when she felt “all alone in the universe?” Share an example from your life that either supports or refutes Aunt Mary’s statement.
Activities:
1. Read Debbie’s description of Marie on pages 20-21 and of her family and home on pages 26-30. Draw Marie or her mother based on this description. Describe one of your neighbors or their house in similar detail.
2. Debbie has a miserable time at the carnival with Maureen and Glenna. Retell the day from the point of view of one of the other girls.
3. Debbie offers readers instructions on how to make various crafts she completes to kill time over the summer. Think of something you know how to make or cook. give a “how-to” presentation to the class.
4. Read the description of the dance performance Debbie watches on TV. Recreate the dance in a class or group performance.

A Note from Lynne Rae: I recently made the craft that starts off chapter 6. There is a drawing, and instructions, in the book. Here is a photo of the one I made:

I can’t remember what it’s supposed to look like. It doesn’t actually look like leather or anything. But I think it looks kind of cool. It was fun to make (if, like me, you kind of enjoy tedious little projects), and took about two hours.